The secret of black water (A detective story)

FINLAND
14 years old children Jade, Tom, Elise and Conan were spending their day in Helsinki. That summer day was hot and sunny and they wanted to go to the beach. They were eating ice cream and they played beach volley. There were the finnish championship tournament of beach volley on the beach. Tom and Conan took apart of that tournament. Jade and Elise were watching the tournament and try to cheer them up. Tom and Conan played well. They won all their games and they became finnish champions. Jade and Elise were really about their succes. After the games they went to swimming. Suddenly Jade and Elise noticed that water became totally black. All animals and fishes were gone.
– What is happening? Tom asked.
– I really don’t know, Elise said.
– We have to find out! the children decided.

POLAND
“We must get out of water!’, Jade said.
“OK. Let’s go!’, Conan said.
Children were walking along the beach when they noticed a little lighthouse and they decided to go inside. It was cold and dark so Elise was very scared and she was screaming. They were going straight on and they saw very long and old stairs.
‘Move on. We must go upstairs’, Tom said.
‘I think it’s a bad idea, me and Jade want to go home’, Elise said.
‘No, we have to find out! You can’t do this!”, Conan said.
‘But we are scared!’, Elise and Jade shouted.
‘Don’t worry. Everything will be OK’, Tom said.
When they went upstairs they saw a big black stone which was lit by the moon. 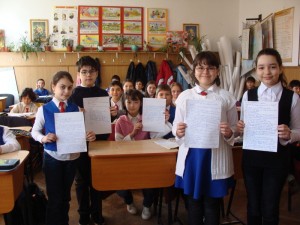 On the black stone there were some carved letters forming the words “cursed stone of  black water”. Was this the name of the stone?
The four children got scared and curious at the same time. They wanted to know more about this mistery. The decided to break the stone but they didn’t know how to do it. They were hoping that by breaking the stone the curse of the black water would disappear. Jade had the idea of dropping the stone from the height of the lighthouse. They needed about two hours to push the large stone to the edge of the terrace.
” Are you sure it’s a good idea to break it?” asked Elise. She was trembling because of the cold and the wind up there in the lighthouse but also because she was so frightened.
” You will see that once the cursed stone is distroyed, the water will turn normal.” said Conan trying to persuade himself and the others.
“Yes, I want our blue, pure water back. And all the fish.” added Tom.
” I want to swim and play again” said Jade happily.
So, they all agreed that the stone must be broken. With a final effort they pushed it down.
When the stone reached the ground, it broke into thousands of small pieces. A loud scream was heard for a few seconds. Then everything was calm. The children ran downstairs to see what happened with the stone. Next to the lighthouse, on the place where the black stone had fallen, they saw a beautiful, blue, transparent sapphire. They took it in their hands and at the light of the torch they could read: “You, who found me, …

“…must suffer the consequences that come.” The children shuddered.
“I told you this was a bad idea,” whispered Elise.
“Oh don’t be such a …” but Tom never finished the sentence for a big wave hit the shore, knocking them all into the sea.
“Help!” screamed Jade, bubbles erupting from her mouth. Suddenly another wave came, the sea spat them out on the shore. They all clambered to their feet, scanning the beach around them.
“Wait, where’s Conan?” cried Jade.
“Wasn’t he here a minute ago?” asked Elise.
“We have to split up and find him,” said Tom, in a vague attempt to keep calm.
Suddenly, out of nowhere, a mist began to rise, and soon even the cliffs were swallowed out of sight. The gem was still buried in Tom’s pocket, as he blindly staggered through the thick mist.
“Is that you Conan?” said Tom as he noticed a dark figure in the mist. The figure came closer … and closer.
“Conan, is that you?” he said again. It wasn’t Conan, it was something else.
“Tom!” It was Jade. She hadn’t found something. Something had found her. And it was coming for the rest.

Jade disappeared before their eyes; Tom and Elise were terrified. Ten seconds later they began hearing frightening noises that seemed to be coming from every direction. They looked at each other with fright in their eyes, and began running until the noises were out of earshot.
When they finally stopped to catch their breath, Tom whispered,
“We have to find Uncle Mitchell, he’ll know what to do…”
They fled to Uncle Mitchell’s cabin and they told him what had happened.
Uncle Mitchell looked shocked and he said, “I used to hear this one when I was a kid, but I had always thought it was an old wives’ tale. According to the tale, you must return to where you found stone and then go to the top of the lighthouse and place it into the light. Then you will know what to do. I don’t know the rest of the story.”
They thanked Uncle Mitchell, left the cabin, and started running toward the lighthouse. After a few miles they heard the noises again and darkness suddenly surrounded them. Tom reached out, searching for Elise in the darkness, he touched something and hard and cold. It was Elise’s body, but she had turned to stone. Shocked, Tom realised he was on his own now, and knew he had to make it to the lighthouse if he were to have any hope of saving his friends. He sprinted off into the darkness once again…

Finally the lighthouse started to appear in the distance; Tom took a deep breath and ran with all the strength he had left. As he made is way up the endless lighthouse staircase, he could see from the occasional windows that the darkness covering the beach and surrounding the lighthouse was becoming thicker and thicker, so compact he could almost feel it. He wondered if all his friends were now cold stone corpses and if he would still be in time to save anyone and restore the beach to its pure crystal tranquility.
‍When he made is way up to the place where they first found the stone, gasping for air and feeling a strange pain where the pocket that contained the precious sapphire touched his skin, he took it out in the moonlight and the gem became really cold, so cold in fact that he was worried he would get ice burned.
‍Mildly shaking Tom tried his best to lay the stone in the center of the moonlight beam, so all the room turned into a vibrant tone of blue and our hero felt first a wave of uncontrollable cold and then a sense of comforting warm as the pale light hit the stone.
‍Tom peeked at the window in hope that everything would be back to normality and he was filled with a huge sense of relief.
‍The beach was clear of any dark figures or clouds and as the sun raised he could see his friends in the water line, which was now more blue and clear than ever, lying down soaking wet, all of them perplexed of the troubled night they had, but happily not made of stone anymore, happily… breathing.
‍He rushed down the stairs to meet them…

When he got off the stairs he looked towards that place again and he understood that it was a mirage. He was shocked. He suddenly heard a loud clapping. He woke up in a cinema!
He looked around for his friends and he saw them next to him.
-where are we? He asked.
They told him that they were in a cinema and they were watching a horror movie. He realised that he fell asleep, so everything was a dream! He started laughing!
-What are you laughing about?
While he was laughing he told them his dream. Conan had the idea to write Tom´s dream on his blog.
After a few months a writer viewed the story on the blog and he decided to publish it with the name “The secret of the black water”!